Kubu Island is an extraordinary outcrop of rock on the edge of Soa Pan in the middle of Bostwana. It is home to an incredible forest of ancient Baobab trees that stand like giant sentinels on the edge of the flat expanse. Winter is one of the best times to visit this amazing space as the Milky Way is at its brightest, making for an fantastic astrophotography experience. Join us this year in August as we picture the stars above.
Visit the Workshop Experience... 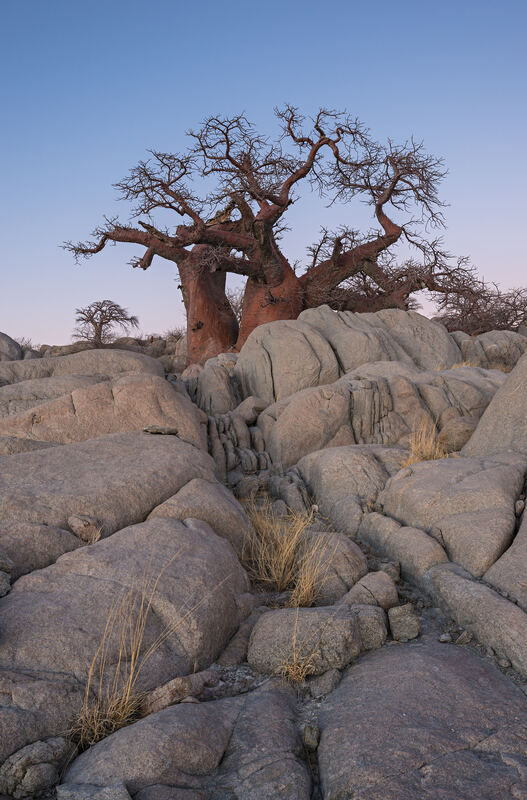 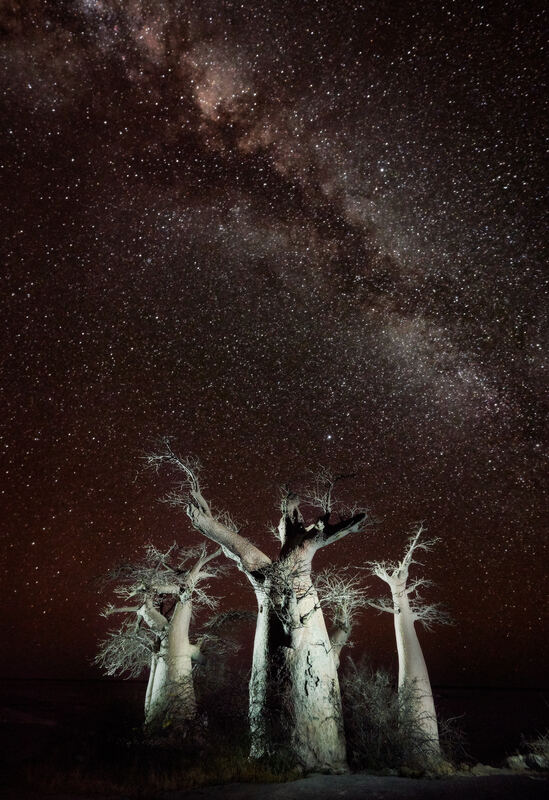 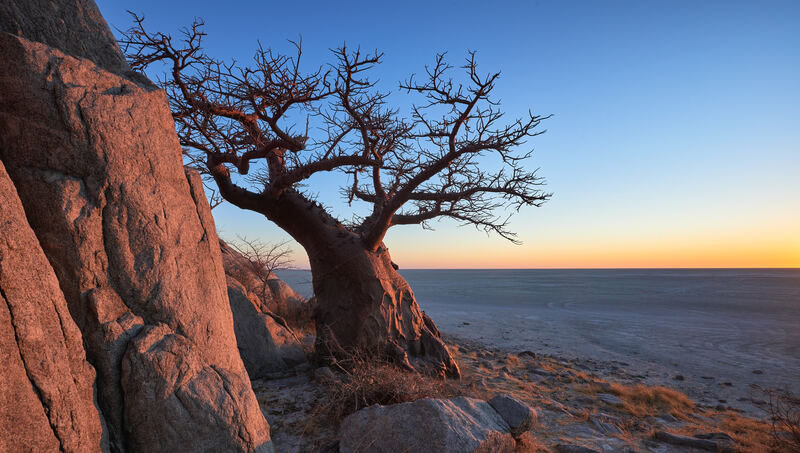 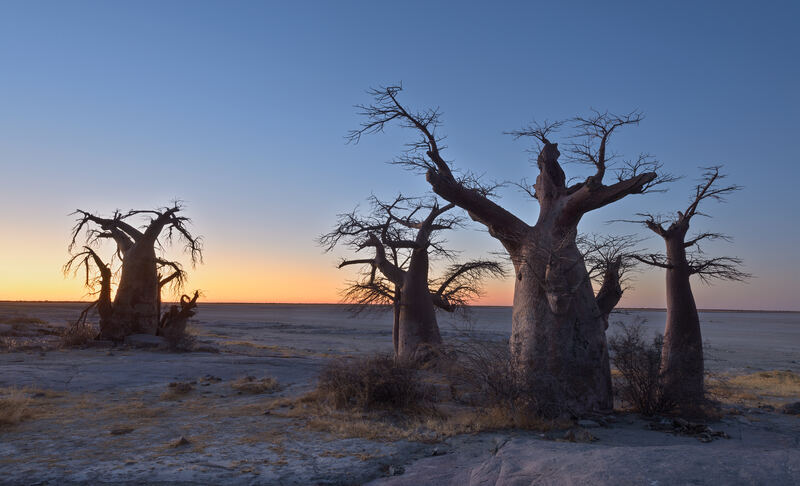 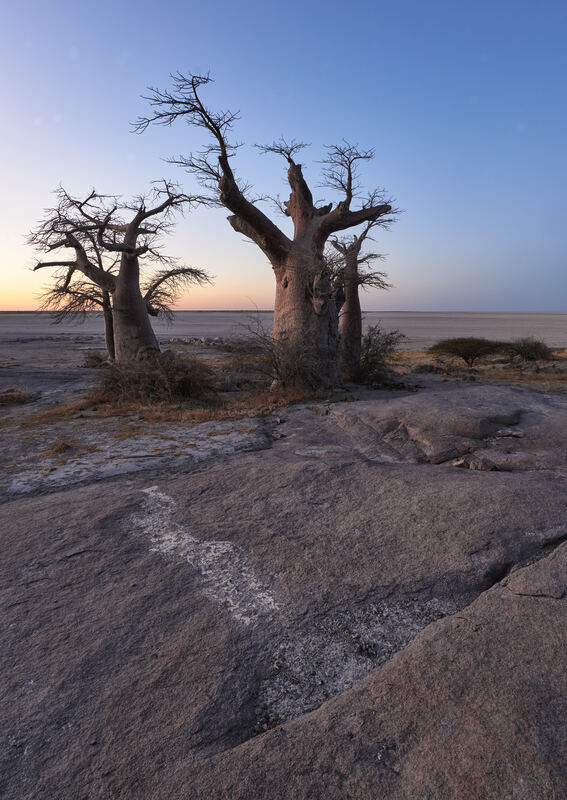 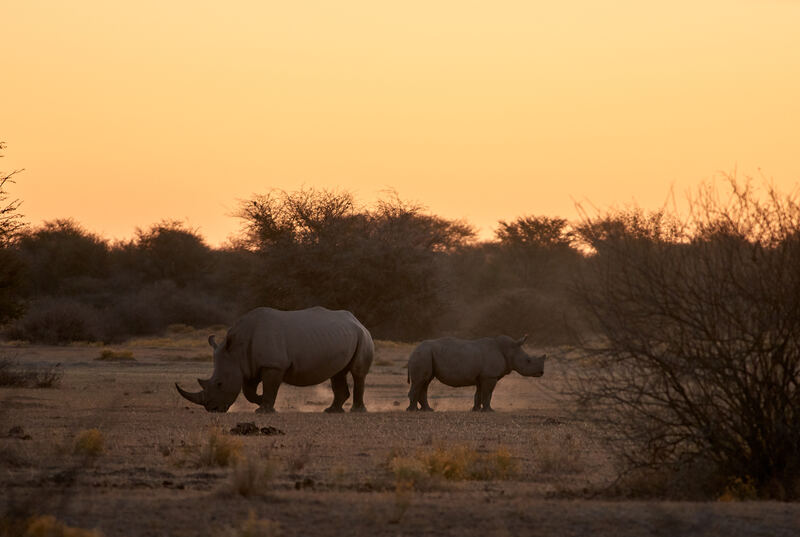 Landscape photographers seem to have a penchant for hard to reach out of the way places. Yes, we tend to seek beauty in the landscape, but there is also the quest to find the unusual. Places like Dead Vlei in Namibia are not so much beautiful as astounding. They defy our usual imagination of the world. The much photographed Yosemite Valley is alluring, not only because it is beautiful, but because it is otherworldly. Like the hanging cliffs of Vietnam, it looks more like something out of the imagination of a science fiction novel. Of course we tend to forget that Science Fiction is very grounded in what we experience and have in our own world, just on a imaginatively grander scale. When that grander scale turns out to be real, well it just floors the landscape photographer.

Kubu Island really is surreal. Situated at the western edge of Soa Pan, it is basically a prehistoric rocky mound of granite. What sets it apart from any other small rocky outcrops, is the fact that it is covered in baobab trees. The surrounding Soa Pan, a flat expanse of dried mud that stretches as far as the eye can see, further adds to the surreal qualities of this unique place. Soa Pan is part of the greater Makgadigadi pan complex, which would have formed the basis for the Makgadigadi lake millennia ago. Kubu Island, with its fossilised bird guano was clearly once an island on the edge of this enormous lake system. Now, however, the Pans only fill with a thin layer of water once a year (sometimes skipping a year or two during extended droughts), and the baobabs watch over the immense flatness that is Soa Pan.

Stepping over the rocks of Kubu Island feels like you are traveling back in time somehow. No doubt this is inspired by the vast trees, some of which are more than likely well over a 1000 years old. There is a sense of time paused on the eastern side of the island that faces the pan. Of course the sense of timelessness does disappear somewhat on the western side of the island which is where the campsites are situated for visitors.

The thing about Kubu Island is that other than photographers, most people don’t want to spend more than a night there. They come, they see, they go. There is very little apart from a few long drops at the designated campsites (a new campsite office is was under construction the last time I was there…and is apparently still under construction). You have to carry literally everything you need in with you. The nearest village is Mmatshumo to the south. This is 45km away on a sandy track that is easy to get bogged down in. Do not attempt to reach the island without a four wheel drive! As it is, one shouldn’t even consider reaching the island at all from Mmatshumo in the wet season (there is apparently a dry route, but even this can become a muddy quagmire in the wet season). For photographers though, Kubu Island is extraordinary! This is why we spend 3 nights there.

The majestic baobabs stand like ancient sentinels on the grey granite mounds of the island. Personally it is the only place I have visited where these gnarled arboreal giants stand in such close proximity; like spinneys of trees. Here you will spend evenings photographing the Milky Way over the baobabs, playing with panoramic of the full stretch of the ribbon of stars.

For a photographer the island is simply one of those places that get added to the bucket list of landscape locations. The baobabs are incredible, the night sky phenomenal and the vastness of the pan mesmerising. Non-photographers seem to get get bored quickly, which is a pity. Personally, I can’t wait to go back. The distances that have to be traveled and the fact that you have to carry everything with you make it very difficult to run a workshop at the island. However, undaunted by this, this is exactly what the collaboration of Nature’s Light and Hunter’s of Light plan to do!   If spending time under the stars capturing these gentle giants under a night sky sounds appealing, then we are heading there this August and would love you to join us.

Note: the workshop has been designed so that guests can opt to continue into Botswana fro the long weekend.

Price:
(I’m in not for the photography) R15, 900 - includes accommodation, park fees, and photographic instruction. This is self-drive and self-camp so you need to be able to bushcamp, and join the convoy with your own vehicle.
(Feed Me Seymour) R18,800 - All meals included as well as most snacks and some drinks.

If you would like an all-inclusive fee that includes vehicle and camp hire, as well as catering, this can be arranged.